Cocaine is a potent and addictive stimulant drug. Cocaine often comes in a white powder form. Common ways of using cocaine are snorting it, smoking it, or injecting it. Cocaine is part of the stimulant drug class and is known as a schedule II controlled substance.

Cocaine is addictive because of the ways it affects the brain after repeated use. When you use cocaine, your brain produces high levels of the chemical dopamine. This chemical is associated with how you experience pleasure. Since cocaine use results in the release of increased dopamine levels, it causes your brain to stop producing it on its own over time. This deficiency often leads to the development of cocaine dependence, as they may start to feel like they can’t function normally without it.

Can You Overdose on Cocaine?


Why Should You Learn About Cocaine Overdose?

Now that we’ve answered the question, “can you overdose on cocaine?” Let’s discuss why you should learn about cocaine overdose. Most cocaine overdoses involve your heart, including deadly arrhythmias and cardiac arrest. The stress the drug puts on your heart is why cocaine overdose can be extremely dangerous and even fatal. If you or someone you love is using cocaine, it’s vital to recognize cocaine overdose symptoms. While overdoses can be deadly if quickly treated, they can be reversible.

Symptoms of an Overdose

As mentioned earlier, cocaine overdose is hazardous and can be fatal. In some cases, cocaine overdoses can be reversed, but immediate medical attention will be necessary. Symptoms of an overdose may be physical or psychological.

How Much Cocaine Does It Take To Overdose?

Another common question is, “how much cocaine does it take to overdose?” One of the difficult things about cocaine overdose is that it depends on different factors. A person can potentially overdose after taking a few hundred milligrams, where someone else could snort a few grams and not overdose. Essentially, overdose can be highly unpredictable.

Dangers of an Overdose

The total overdose deaths involving cocaine have increased from 1999-2019.1 Cocaine overdose may also be involved with other drugs such as opioids, so the graph also tracks the percentage of those overdose deaths that involve a combination of cocaine with opioids. 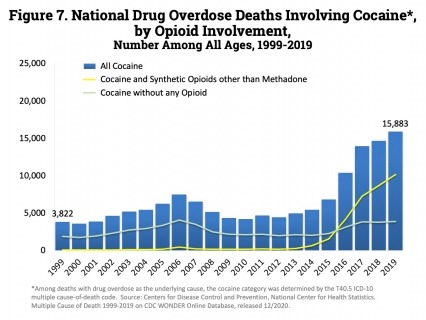 Cocaine abuse also results in a substantial amount of ER visits each year. According to the 2011 Drug Abuse Warning Network (DAWN) report on emergency department visits, cocaine was responsible for 505,224 ER visits.2 Many of these ER visits were from people experiencing severe chest pain, which is one of the main signs and risks of a cocaine overdose. Serious consequences can result if proper cocaine overdose treatment isn’t provided. This danger is why quick treatment in these situations is essential.


Dangers of Different Types of Cocaine

It is possible to inject cocaine, also known as “shooting” cocaine or liquid cocaine. Liquid cocaine is used by dissolving it in water and then injecting it into the vein. One of the main dangers of this method is that it is even more addictive when injected and can lead to more severe behavioral and psychological side effects.

Another risk with this method is the cutting agents that may be used on the black market. At times, drug dealers will mix cocaine with other substances, such as heroin, to make more money while selling less. When you inject cocaine, it has a stronger effect, and if it’s combined with other substances, this increases the risk of overdose.

Crack cocaine produces a shorter and much more intense high than other forms of cocaine use.3 Since the high produced from crack cocaine is over quickly, there is an increased risk to abuse it in a binge-like pattern, making them more likely to develop an addiction. Crack cocaine use also increases the risk of other adverse side effects such as heart attack, stroke, seizure, or respiratory (breathing) failure.

The main difference between crack vs. cocaine is how it is abused. Crack is smoked, whereas powder cocaine is usually snorted, swallowed, or injected. Otherwise, crack and cocaine are very similar substances with little to no differences in their chemical structure. This structure means that both forms produce similar results.4

Snorting cocaine in its powdered form is the most common way of using it. One of the main dangers of snorting cocaine is that it can damage the nose and sinuses, leading to soft tissue damage and sinus infections. Over time if the tissues in your nose aren’t allowed to heal due to frequent cocaine use, the infection and irritation will worsen, leading to several major medical concerns.

One of the main dangers of smoking cocaine is that the high tends to be shorter and more intense. This high can lead to binge use of the drug and a greater likelihood of an overdose. Smoking cocaine can also lead to other adverse side effects over time, such as lung damage, elevated blood pressure, and heart attack.

If someone you know overdoses, taking them to the ER is another good option. It’s essential to get them to the ER as quickly as possible and let the medical staff know if you believe an overdose on cocaine may have occurred. This information will help them provide timely and effective treatment to help.

Ultimately, the best way to prevent an overdose is to treat the addiction itself. Cocaine addiction can negatively affect life in many different ways, but there are resources available to help. If you or someone you know is struggling with an addiction, speaking to a medical professional or going to a treatment center can be an excellent first step towards recovery.