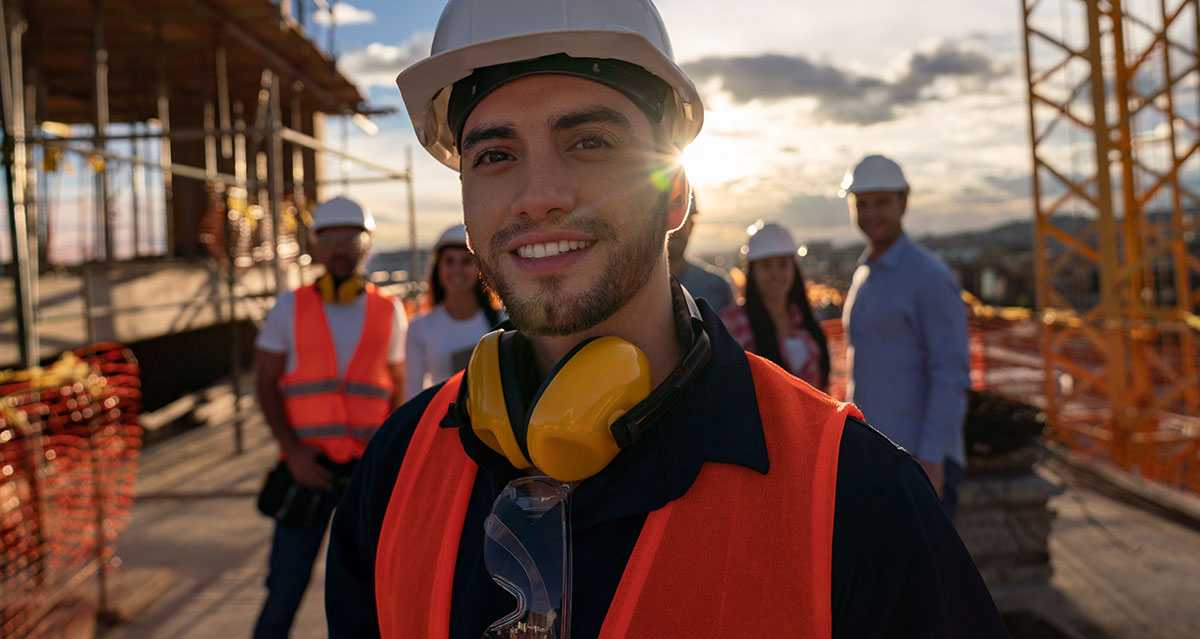 meth in North Carolina is still a problem

Methamphetamine is a powerful stimulant drug that is highly addictive.1 Meth is a party drug that comes in clear crystal chunks or shiny bluish-white rocks. It’s commonly used by smoking, snorting, swallowing, or injecting it into a vein.

When used, meth produces a very intense rush that lasts for a short time. Meth is illegal due to its highly addictive properties. Meth addiction can take an extreme toll on life and well-being.

Since meth addiction can be so severe, it’s essential to be aware of signs of meth use, as everyone struggling with addiction should be able to get the help they need.

History of Meth Use in North Carolina

With the opioid epidemic taking over the news, meth in North Carolina is still of significant concern and has been for many years. Meth use became known as a problem in the 1990s and early 2000s, with the dangers being broadcasted of its highly addictive properties and adverse long-term effects. However, since then, the news coverage about meth use has faded. This lack of coverage does not mean it isn’t still a problem.

In an article from northcarolinanews.org, Jesse-lee Dunlap, a social service worker, speaks about how meth is still the primary drug used in areas of North Carolina.2 Dunlap, who works for N.C. Harm Reduction Coalition, provides a weekly needle exchange and health services program to North Carolina residents. In the article, Dunlap states that “Out of roughly a hundred clients who participate in the exchange, roughly three-quarters use meth.” This statistic alone shows how much of a problem meth use can be in some areas in North Carolina.

An article on courier-journal.com talks about a Mexican drug cartel known as Cártel Jalisco Nueva Generación (CJNG).3 Since 2011, CJNG has smuggled hundreds of millions of dollars over the border. It usually smuggles the drugs into less populated areas like the mountainous regions of North Carolina. This route has led to meth addiction and distribution becoming widespread in these areas.

According to the article, “Since 2012, a joint local, state and federal task force known as Operation Dixie Crystal has led to the convictions of more than 266 federal defendants in western North Carolina for meth trafficking.” However, despite these numerous convictions, meth in North Carolina is still a problem. This continues due to the fact that the CNJG is still finding new ways to smuggle in and distribute drugs in these areas.

How the Opioid Epidemic Impacted Meth Use

Opioids are commonly involved in overdose deaths in the U.S. Due to this fact, the dangers of opioid use have been widely documented in the media, causing the appropriate name “The Opioid Epidemic” to become widespread. However, this does not mean that meth use is not also of significant concern. Meth overdose is less common, which implies overdose deaths happen less often from meth than opioids. This implication causes the media to not report as often on meth-related incidents.

According to an article on psychiatrictimes.com, although meth overdose deaths are less common, “In 2018, 28% of our hospital admissions involving substances were related to methamphetamines—more than twice the percentage related to opioids.”4 This shows that meth use is prevalent and a significant concern in many areas of the U.S., such as North Carolina.

According to an article on charlotteobserver.com, in February of 2020, “Nearly $300,000 in meth was seized after an investigation into a major western North Carolina drug ring.”5 Later in August of 2020, “Authorities seized more than 100 kilos of meth (worth approximately $2 million) and arrested three people as part of a drug bust in Wilkes County,” according to an article on wbtv.com.6

These two large seizures relating to meth labs and trafficking show that meth in North Carolina is still a huge problem in 2020. Despite taking down two large meth operations, this does not mean that meth addiction will not be a problem in the future. There is still much more work to be done to prevent the production and distribution of meth in these areas.

Here is a chart tracking the number of meth lab busts by N.C. State Bureau of Investigation from 2003-2017.7

This map provided by the N.C. State Bureau of Investigation shows the location and number of methamphetamine lab busts in North Carolina during 2018.8 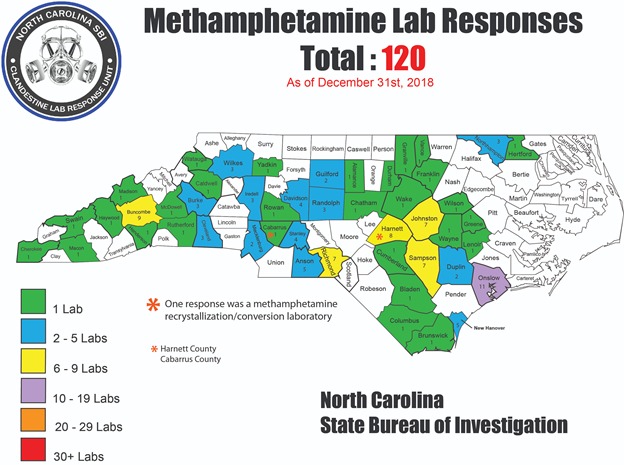 This map provided by the N.C. State Bureau of Investigation shows the location and number of methamphetamine lab busts in North Carolina during 2019.8 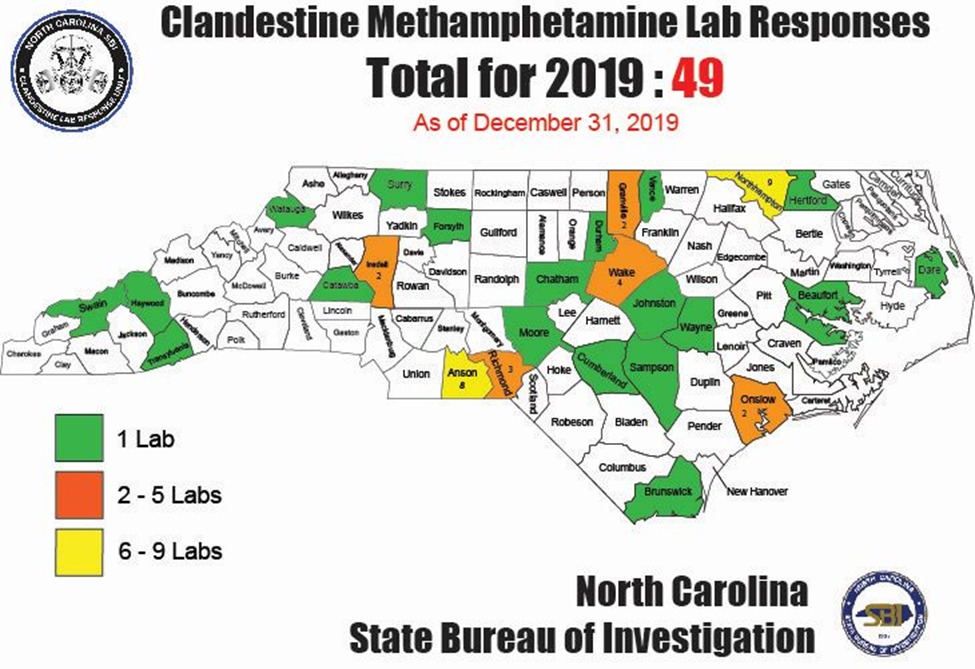 While the number of lab responses has decreased in recent years, this doesn’t mean that meth in North Carolina isn’t still a problem. With large cartels involved in the production and distribution of meth, new sites are popping up all the time.

Meth and Fentanyl – A New Danger

An alarming spike in fentanyl-related overdose deaths has posed a new concern. Fentanyl is a powerful opioid drug that is known to be 50 to 100 times stronger than morphine. Since it has such powerful effects, it’s started to be laced with other illegal drugs, such as meth. If someone takes a drug and doesn’t know it’s laced with fentanyl, this can be of concern and often leads to overdose deaths.

The number of overdose deaths involving psychostimulants (such as meth) combined with opioid involvement (such as fentanyl) has risen.9

This graph shows why there’s such a growing danger combining meth and fentanyl, as these types of overdose deaths have risen significantly in recent years.

Signs of Meth Use

It’s helpful to be able to recognize the signs of meth use. Knowing the symptoms can make the difference in spotting a problem in someone you know or care about so you can assist them in getting the help they need to recover.

Common signs of meth use may include:

Meth abuse can trigger meth psychosis, where thoughts and perceptions become distorted. These hallucinations and false beliefs that happen during meth psychosis can cause someone to act irrationally. This side effect is one of the many dangers of meth use and why those struggling with addiction get the help they need. If you or someone you know is struggling, there are resources available. Speaking to a medical professional or going to a treatment center can be an excellent first step on the path to recovery. 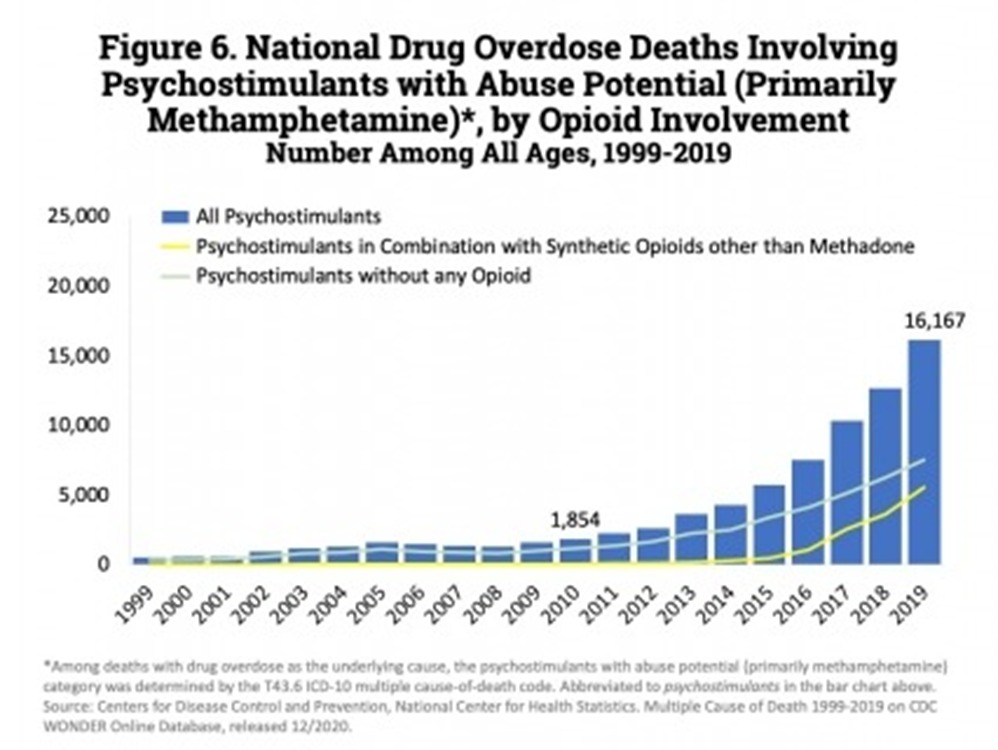